Putting on the Ihram 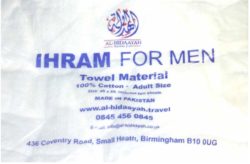 Men’s ihram on sale in Al-Hidaayah travel and bookshop, Birmingham, 2014.

Hajj is performed annually from 8 to 13 Dhu al-Hijja, the twelth month of the Muslim lunar calendar. By the time pilgrims cross one of the 5 miqats (boundary points) surrounding Makkah, they must have made the necessary ablutions, donned special ritual attire, the ihram, and stated their intention to perform Hajj.

For men the ihram comprises two unstitched pieces of white cloth. Women should dress modestly but must not cover the face. All pilgrims must observe various prohibitions. British Muslims typically put on their ihram either in the UK, where flights to Jeddah or Madinah make their stopovers or on the aeroplane itself.

There are two states to ihram. There is the way you are dressed and there is the spiritual state. … You’re surrounded by people who are also in that state, you feel this calmness and this serenity, God gives you this patience; so that was certainly my personal experience. The rituals of Hajj, British Museum.

Once in a state of ihram pilgrims must call out the talbiya: “Labbayk allahumma labbayk … Here I am, Lord, responding to Your call … Praise belongs to You, all good things come from You and sovereignty is Yours alone”.

Thought not simply “automatic”, most pilgrims speak of a growing sense of detachment and separation from everyday life, as if they have literally crossed into “another world”. They become more “God-conscious” and try to devote themselves to pleasing Allah in worship.

It was that kind of feeling of, you’re preparing for a journey, and you’re presenting yourself, and you are trying to make a connection to Allah. … So it felt very special. … So I took a lot of care to keep it looking as white and pristine.

A Gathering of the Ummah Most pilgrims tell stories about special moments when the idea of a Muslim ummah, united in all its diversity, becomes a reality during Hajj. An example of this concerns the way in which everyone wearing the ihram symbolises equality before God, regardless of denomination, gender, race or social class.

Nevertheless, pilgrims do remark upon the many ways in which everyday economic, cultural and individual differences remain noticeable during pilgrimage. For instance, Hajj-going is organised in terms of readily identifiable national groupings, each of which are typically perceived in particular ways.